Trending
You are at:Home»Lee Kuan Yew»What did Lee Kuan Yew say when he was called a dictator?

An Interview with Lee Kuan Yew

WASHINGTON— In blurbing the memoirs of the dictator of Singapore, President George Bush gushed: ”Senior Minister Lee Kuan Yew is one of the brightest, ablest men I have ever met.” Baroness Thatcher: ”He was never wrong.” Henry Kissinger: ”One of the seminal figures of Asia.”

”’You call me a dictator,” Senior Minister Lee said when we recently met at the World Economic Forum in Davos, Switzerland. ”You are entitled to call me whatever you like, but that doesn’t make me one . . . do I need to be a dictator when I can win, hands down?”

He brought up the example of Chee Soon Juan, 36, a neuropsychologist who dared to run for Parliament. After being fired from his job and losing his home, Dr. Chee was arrested for breaching the Public Entertainment Act by trying to make a speech.

”There was this little fuss about a dissident,” said the dictator, ”who said, ‘I’m going to speak at Raffles Place,’ which is our business center, without a permit. So why didn’t we let him speak?

”I said the law has been on the statutes for the last 50 years. If everybody just turns up at a busy junction at lunchtime and makes a speech and runs around . . . there would be pandemonium. We are not that kind of society.”

Joseph Nye, head of Harvard’s Kennedy School, suggested that Singapore set aside a place like London’s old Hyde Park Corner, where people gathered to hear speakers sound off freely. Lee promises: ”We’ll probably do it.” That’ll be the day. 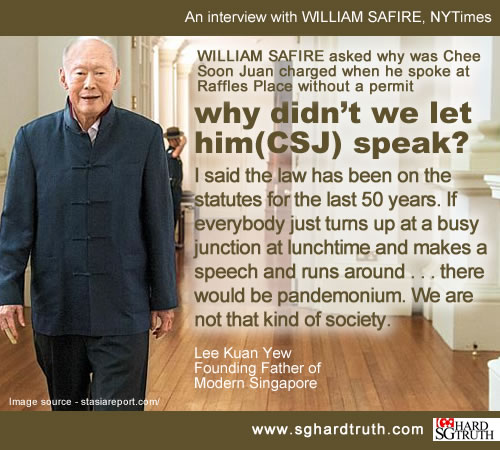 The dissident Chee was fined the equivalent of $800, refused to pay, spent a week in jail and faces further harassment. I asked: If not worried about opposition, why fine him at all?

”Because the laws are there, and he has complied with those laws for the last eight years. Since 1992 he has been campaigning. And now, because he has lost, and lost badly in an open, free election, one to one against one of our candidates, he’s had exposure on television, which was disastrous for him because he was caught out lying and fibbing and fabricating evidence on a health care paper. . . . So he gets a big splash in the Western press, because they want to beat me up. It’s all right; it doesn’t bother me.”

When dissidents say ”liar,” they are driven into exile; obviously a free press bothers him plenty. ”We do not own the [Singapore] press, as they do in Malaysia. Nobody is allowed to own more than 3 percent of the shares. The management of the press is in the hands of our four big banks.”

”And that makes all of them terrified of crossing you.” Result: 80 of the 83 seats in Parliament are locked up by Lee’s party. Why does he fear political contests?

”There are seven or eight parties that contested the last elections. They lost because they cannot produce an alternative more attractive to the electorate than us. Look: Nobody in his right mind believes that we rigged elections.”

As one of the legion not in his right mind, I asked: How about free labor unions?

”Nothing to stop them from forming independent labor unions. But they can’t succeed, because the unions who are with us produce more results.” About nepotism: ”Would your son be Deputy Prime Minister if he were not your son?” He snaps: ”If he were not my son, he would be the Prime Minister. He came up faster than any of the others, but I told him it would do him no good.” The scion must await his time.

The determinedly irreplaceable Lee Kuan Yew is the world’s most intelligent, and to some most likable, despot. In our hour’s talk, he offered insights about China to be reported in a future column, unless my publisher gets sued, bankrupted, jailed and flayed with a cane in the meantime.

”You are not a silly man and I don’t give you silly answers,” the Senior Minister said in parting. I’ll put all those answers on the Internet when I figure out how.