Trending
You are at:Home»SG Policies»Something Else for Singapore to Brag About 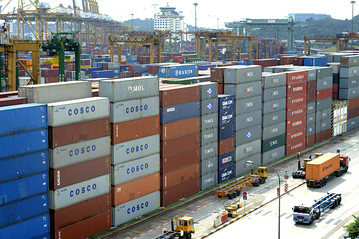 Who is winning Asia’s infrastructure race?

The index measures how easy and inexpensive it is to move goods through a country based on several criteria, including the quality of ports and rail, competence of transport companies, the ability to track goods, and prevalence of bribe solicitation. Singapore scored the top score of 4.13 out of 5. Hong Kong  was just behind with 4.12. Japan was 8th overall with a score of 3.93, the same as the U.S.

The index is based on a survey of 1,000 domestic and international logistics companies involved in cargo handling, distribution, shipping and warehousing in 155 countries globally.

Measuring the ability to get goods from point A to point B has special importance in Asia where trade and exports are critical components of local economic engines. The ability to get a container of Chinese-made iPads or Indonesian-made sneakers to port and through customs quickly is regularly cited as an important factor for investors. Local government officials are often touting infrastructure investments to unlock economic growth. Of course, a lot of times those promises of speedy highways and new ports don’t come through on time or on budget. But the ones who do deliver seem to prosper with more foreign investment and higher economic growth.

While Singapore has much to be proud of with its modern ports and famously trade-friendly administration, Hong Kong wins most-improved among the top trading countries in the eyes of the survey respondents. It leaped from a worldwide rank of 13 to 2, improving its score substantially. The report didn’t say why Hong Kong, which has one of the world’s busiest seaports and the busiest air cargo hub, was so improved in the two years since the previous survey.

Less-developed Asian countries showed some improvement from the 2010 index, but probably not as much as governments would like. Indonesia’s well known logistics bottlenecks place it 59th overall in the world. That’s better than the 75th place showing two years ago, but even lower than where it was in 2007 when it ranked 43rd. All that bouncing around still leaves it decidedly in mediocre territory.

The report notes that Indonesia has a long way to go in terms of “dwelling time” at its main port of Tanjung Priok. In 2011, containers sat around on average for six days in port, compared to one day in Singapore and four days in Malaysia. A plan to double the port’s capacity is welcome, the report says, but it notes that capacity isn’t the only problem when it comes to the wait. It is “cumbersome pre-customs clearance procedures that cause much of the delay,” the report says.

India’s much maligned infrastructure actually punches above its weight when compared to other countries of similar income level. It ranks 46th overall, the top among “lower middle income” countries, where per capital gross national income is less between $1,000 and $4,000.

Indians, forever comparing themselves to China, would likely not be happy with that score. China is 26th overall, packed in with the likes of Turkey, Ireland, Italy and Portugal.

One troubling finding of the report is the rather high percentage of survey respondents who report “often or nearly always” receiving “solicitation of informal payments” related to moving goods, a category that sounds a lot like bribes and payoffs. In East Asia 19% say they receive such solicitations. In South Asia it’s 35%, higher than Sub-Saharan Africa at 26%.