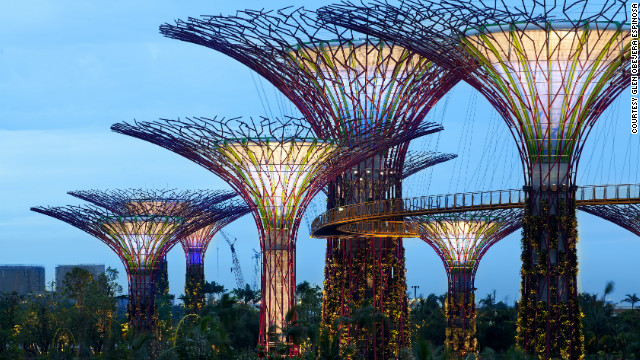 Solar energy collected by the supertrees during the day is then used to light the magnificent structures after night fall.

(CNN) — Singapore’s latest development will finally blossom later this month, with an imposing canopy of artificial trees up to 50 meters high towering over a vast urban oasis.

The colossal solar-powered supertrees are found in the Bay South garden, which opens to the public on June 29. It is part of a 250-acre landscaping project — Gardens by the Bay — that is an initiative from Singapore’s National Parks Board that will see the cultivation of flora and fauna from foreign lands.

The man-made mechanical forest consists of 18 supertrees that act as vertical gardens, generating solar power, acting as air venting ducts for nearby conservatories, and collecting rainwater. To generate electricity, 11 of the supertrees are fitted with solar photovoltaic systems that convert sunlight into energy, which provides lighting and aids water technology within the conservatories below.

Varying in height between 25 and 50 meters, each supertree features tropical flowers and various ferns climbing across its steel framework. The large canopies also operate as temperature moderators, absorbing and dispersing heat, as well as providing shelter from the hot temperatures of Singapore’s climate to visitors walking beneath.

The project is part of a redevelopment scheme to create a new downtown district in the Marina Bay area, on Singapore’s south side. Project organizers hope the completed Gardens by the Bay will become an eco-tourist destination showcasing sustainable practices and plants from across the globe.

Speaking at a preview event last November, Lee Kuan Yew, the first prime minister of the Republic of Singapore, said the project would “showcase what we can do to bring the world of plants to all Singaporeans,” adding that the gardens would become “the pride of Singapore.”

Bridges dubbed “skywalks” have been erected connecting several of the higher 50-meter supertrees (the same height as the Arc de Triomphe in Paris), letting visitors stroll between them and view the gardens from dizzying heights.

The horticultural heaven also boasts two green conservatories in close proximity — the Cloud Forest and Flower Dome — climate-controlled biomes inspired by the shape of an orchid flower, which project organizers hope will become the park’s main attractions. The biomes are the equivalent size of four football fields and will become the new home for 220,000 plants from almost every continent. These are some of the only areas where an admission fee is charged — approximately US$22 (S$28) for holiday-makers or US$16 (S$20) for Singapore residents.

One of the sustainable features of the Flower Dome is that horticultural waste feeds a massive steam turbine and generates the electricity on-site to help maintain the cool temperatures of the biome.

However, the supertrees and biomes only make up 5% of the multimillion-dollar landscaping development won after an international design competition by UK landscape architects Grant Associates. The remainder of the Bay South garden will pay homage to the ethnic makeup of the country. In the Heritage Gardens, visitors can explore the Chinese, Malay, Indian and Colonial-themed areas and learn about the links between plants and Singapore’s history. Surrounding these cultural green spaces in the rest of the 103-acre Bay South park are sprawling areas complete with lakes and bridges.

Launched seven years ago by Singapore’s Prime Minister Lee Hsien Loong during the National Day Rally, Gardens by the Bay has been a much-celebrated green undertaking with the other gardens, Bay East and Bay Central, opening to much fanfare. The grand opening of Bay South park area will most likely be another illustrious event.

The horticultural oasis will be a contrast to the country’s extremely dense urban environment, forming part of the government’s overall strategy to transform Singapore into a “city in a garden.”