Trending
You are at:Home»SG Employment / Labour Market»Hard Truths: The Plight of the Poor in Singapore

The poor in Singapore are pitied often for their plight:

“There is no welfare here in Singapore, you have to work till you die.”

“Your parents were uneducated, your family was poor and hungry. You had to stop school to work and you were disadvantaged from the beginning.”

“If you could earn a minimum wage, you wouldn’t be so poor.”

There are occasional success cases of rags-to-riches story, but many still see life as a lucky draw, living day to day, month by month.

According to the Lien Centre for Social Innovation, 20-35% of households live in relative poverty, defined as 50 or 60% of the median wage.

Is there welfare for the poor in Singapore?

“You can be poor from one generation but you must not be poor in every generation… We are not talking about a one-year or two-year problem. These are the people that require five to ten years of assistance to get them out of the dark valleys.” – ex-Minister of MSF Chan Chun Sing (currently Secretary-General of NTUC)

There are multiple lines of assistance, creating a Kuih Lapis effect as ex-MSF minister Chan Chun Sing termed it. 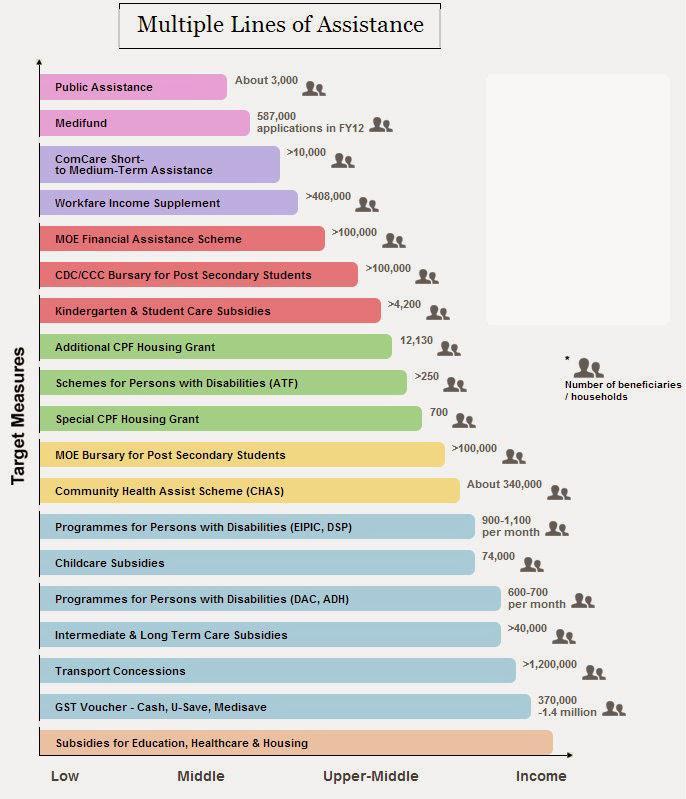 Mdm Ainiah is a low income and soon-to-be single mother of 4 children. Dropping out of school, she only has a PSLE certificate and survives on $50 a day as a cleaner. She has tapped on financial assistance from her union, NTUC, MOE, SINDA, Mendaki, and a My First Skool fund to pay for her children’s education fees, school-related and grocery expenses. Although she finds that the financial assistance is not always enough, she is in touch with a social worker who is helping her with other avenues of assistance.

What avenues do the poor in Singapore have in looking for work-related assistance?

According to a search online, there is help by government, NTUC, CDCs and others such as CDAC, Mendaki and Sinda for low wage workers (as they are officially known in Singapore).

AspirantSG, a local blog that has written about social initiatives in Singapore, commented in one blogpost that low wage workers are often too afraid to speak out in fear of losing their job and as a result, become victims of unfair employment practices.

AspirantSG cited an example of Madam Low, 58 years old, who did not receive CPF after 5 years of working. NTUC’s U Care Centre highlighted her plight to MOM and CPFB and advised her not to accept “silence money” from her employer. She listened to NTUC’s U Care Centre and not only recovered $10,000 worth of her CPF, but helped another 113 colleagues recover theirs.

How can the poor in Singapore earn better wages?

Singapore, who has always believed in doing things their own way, has decided to implement a whole bunch of initiatives to raise the pay of low wage workers.

We can name you three such initiatives without the word “minimum” inside.

Touted as Singapore’s brand of “more than minimum wage” where workers climb skills, productivity, career and wage ladders. The logic is by helping workers add value to the company, their wage increases will be sustainable.

NTUC will continue to drive the Progressive Wage Model in these other industries and wants all employees to benefit from this model (not just the low wage workers). SkillsFuture, which is another tripartite effort in the works, will help Singaporeans who want to be helped become future ready.

This tripartite council (which means that the workers’ union, employers and government sit on it) agrees every year how much low wage workers should get in the form of wage increases.

This year (2015), NWC recommends that workers earning $1,100 a month and below get at least $60 in pay raise. Those earning above $1,100 a month should be given an equitable and reasonable wage increase.

Of course, note that these are recommendations and it is not mandatory for employers to follow suit.

According to socio-political website Five Stars and A Moon, in the course of collective bargaining, the unions will negotiate on matters such as:

Avid travel blogger Passportchop has noted that “The Scandinavian countries of Sweden, Norway, Finland and Denmark don’t have a minimum wage at all because they are so highly unionized. The unions there felt that a national minimum wage would interfere with collective bargaining, and it might even bring the price of labour down.”

“Nordic countries prefer to have a collective agreement between unions and employers as the reference point for wages, not one set by the government. In some cases, particularly in Denmark, that has led to a very strong degree of cooperation between employers and workers.”

Turning our sympathy into empathy

Do we have so much sympathy for the poor and react by championing for minimum wage, handouts and punishments for the rich, that we forget to explore the practicalities of our well-intentioned ideas?

A friend shared this video with me, and I learnt that empathy is the ability to place yourself in someone else’s shoes and understand relate as best as you can to how that person feels in the situation.

With empathy, the ideas we come up with to support our poor will be more useful to them than one-off “feel-good-now-but-later-how” initiatives to help them step out of their poverty traps.

AspirantSG sums it up by questioning netizens “What have we done to increase the good and well being of our low wage workers other than lamenting on social media channels? As a service buyer, are you pushing for best sourcing when selecting your service providers? As an employer, are you taking the first step towards implementing progressive wage model for our workers? Even if you are not directly involved with service sourcing or human resources, have you been making efforts to reduce the workload and expectations of our low wage workers? As a customer, have you at the very least given these workers a smile or a pat on the back for a job well done? Remember actions speak louder than words, make sure you walk the talk.”танцы марьиноотдых на бали в мае