EULOGY BY MINISTER MENTOR LEE KUAN YEW AT THE STATE FUNERAL SERVICE FOR THE LATE DR GOH KENG SWEE AT THE SINGAPORE CONFERENCE HALL, SUNDAY 23 MAY 2010

It was my good fortune to have strong men around me. Of all my Cabinet colleagues, it was Goh Keng Swee who made the greatest difference to the outcome for Singapore. He had a capacious mind and a strong character. When he held a contrary view, he would challenge my decisions and make me re-examine the premises on which they were made. As a result, we reached better decisions for Singapore. In the middle of a crisis, his analysis was always sharp, with an academic detachment and objectivity that reassured me. His robust approach to problems encouraged me to press on against seemingly impossible odds.

If ever there was a slow developer, it was Goh Keng Swee. He did not shine until he got to Raffles College where he was the best student of his year in economics. I first met him there when he was my economics tutor in 1940/41. He had a large Adam’s apple and a gruff voice as he mumbled his comments on the essays of the five students who appeared before him for tutorials. I did not then realise how sharp and clear a mind he had. We met again during the war when he was an impoverished government servant, paid in Japanese “banana notes”.

Our friendship developed when we met in London in 1949-1950 when he was studying at the London School of Economics on a scholarship. I was in London preparing for my Bar finals. We shared a common view that we could run Singapore and Malaya better than the British colonial officials. We became close friends. Together with Kenny Byrne, Toh Chin Chye and S Rajaratnam, we planned to build up a mass movement, to form a political party, win elections and take over from the colonialists. We were blissfully ignorant of the wide tentacles of the communist underground that gripped the Chinese educated world.

By the time we discovered how ubiquitous the communists were in the Chinese schools andÂ universities, clan associations, chambers of commerce, and old boys’ associations, they had their tentacles around us. Together we planned and got rid of the communists from the PAP, then beat them in the referendum in 1962 to join Malaysia and in the general elections in September 1963.

He was hopeless as a campaign orator, but a formidable analytical mind. His writings were crisp, elegant and forceful. After we had joined Malaysia, he stood up for our rights and fought to protect Singapore’s interests against the Federal Finance Ministry. After two years of constant friction and two race riots, in July 1965, he met with then Malaysian Deputy Prime Minister Tun Abdul Razak and Minister for External Affairs Tun Dr Ismail Abdul Rahman. I had asked him to negotiate a looser re-arrangement for Singapore but keep Singapore within the Federation. He decided that the best alternative was a clean break.

After Tun Razak and Dr Ismail agreed, Eddie Barker and I worked furiously to settle the terms of the separation. To avoid tipping off the British, the constitutional amendments had to be done with utmost secrecy and executed in three readings of the legislation in one session of the Malaysian Parliament. Hence on 9 August 1965, the Republic of Singapore became independent.

He was my trouble-shooter. I settled the political conditions so that his tough policies we together formulated could be executed. I gave him the toughest jobs in government: the Ministry of Finance from 1959 to 1965 when economic survival was crucial; Ministry of Defence in 1965 when all we had were two battalions of the Singapore Infantry Regiment, that then had more Malaysians than Singaporeans.

Â When the British announced withdrawal of their forces in 1967, I sent him back to the Ministry of Finance to deal with the loss of 20 percent of our GDP with the withdrawal of the British military spending. When that problem was resolved, he was back in 1970 as Minister for Defence. He mastered defence matters, read up the classics on strategy, Sun Tze, Clausewitz and Liddell Hart. He subscribed to military journals to know the latest in military weaponry. He sent me books and articles, sidelined and flagged, insisting that I must know enough to decide what I had to approve. I read them to have serious discussions with him on our options on arms purchases. He was, de facto, the armed forces chief of staff. He built up the SAF that we now have, an effective fighting force. He set up the Defence Science Organisation for R & D, and created several defence industries from scratch. The Singapore Technologies group now manufacture arms and ammunition and are into aerospace, electronics and computer systems.

After I merged Nanyang University with the University of Singapore in a joint campus, I appointed him Minister for Education. The dropout rate was high and many students left school illiterate. He had come across them as the “Hokkien soldiers” and instructed them in Hokkien. He re-organised schools into one national type. We decided English was to be the language of instruction and of government; the mother tongue the second language.
In 1981, I asked him to take charge of the Monetary Authority of Singapore where our CPF and other reserves were managed. He set up the Government of Singapore Investment Corporation, and built up the organisation to invest and manage our growing reserves worldwide. I became the Chairman. Many enduring organisations, a sturdy SAF, an education ministry that keeps abreast with the times; the MAS and GIC; EDB and JTC were built by Hon Sui Sen and Keng Swee.

He wanted Singaporeans to appreciate the arts. He promoted the Singapore Symphony Orchestra, the Singapore Zoological Garden, the Jurong Bird Park, Sentosa, the Chinese Garden and the Japanese Garden. He persuaded me to subsidise them for Singaporeans to have a feel for beauty and the arts. He lived a simple and frugal life and managed Singapore’s assets in the same way, avoiding waste and maximising value for money. His prudence built up Singapore’s reserves.

Keng Swee and Rajaratnam helped me to select and ensure that we had a team of younger men who would take over the government without a drop in competence, drive or dynamism. We began the system of identifying talented people to bring them into government. In his last major speech in 1984 he reminded newcomers to the PAP to “regard the present condition of the Republic not as a pinnacle of achievement but as a base from which to scale new heights.”

With his passing, we have lost a remarkable and outstanding son. 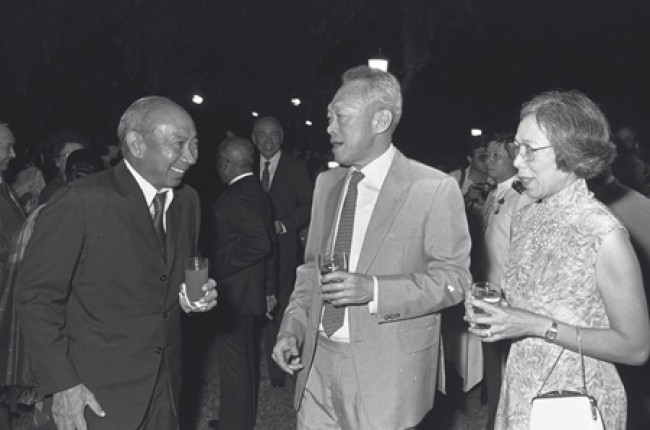