Trending
You are at:Home»Lee Kuan Yew»Lee Kuan Yew: Euro Debt Might Be A Good Buy, After All 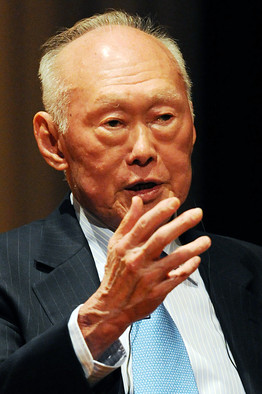 Singapore’s founding statesman, Lee Kuan Yew, has long been critical of the profligacy of Western governments, even before the recent debt crises in the U.S. and the Eurozone brought the world’s financial system to its knees.

But now he’s singing a slightly different tune and advising some investors – notably China – to load up on European debt.

Last year was a humbling one for European policymakers, many of whom headed eastward cap-in-hand, seeking to tap the generosity of Asia’s cash-rich governments to shore up troubled balance sheets back home.

While Mr. Lee, who served as Singapore’s prime minister from 1959 to 1990, built the modern city-state with very little in the way of Western-style government handouts to the poor and unemployed, he now sees good reasons for large Asian governments to come to Europe’s rescue – mainly to ensure Europe stays strong enough to keep buying Asian goods.

“China has US$3.18 trillion in foreign exchange reserves. If the EU becomes mired in Greece’s economic difficulties, China’s exports to Europe will decline,” Mr. Lee said in a column published in Singapore’s The Business Times Friday.

“Now is a good time to invest in distressed and undervalued European assets, euro debts and euro bonds,” he wrote in the column, which also appears in the March 26 edition of Forbes Asia.

Mr. Lee, aged 88, last year stepped down as chairman of the Government of Singapore Investment Corp.–a state investment firm which by some external estimates manages a portfolio worth about US$300 billion–but he still serves as an adviser to the board.

Even in his golden years, Mr. Lee continues to regularly air his views on all manner of topics in Singapore, including race, religion and politics.

But his most recent musings contrast somewhat with a more cynical assessment of Europe’s fortunes he made last September.

Back then he said that Singapore, despite its large financial reserves, would not be able to rescue Europe by buying its bonds due to the island nation’s relatively small economic size.

Moreover, he indicated he believed that buying bonds in general would not necessarily solve the structural problems facing the 27-member state region.

“There’s a fundamental problem in the euro in that it makes (each member) country march to the same drummer. Whereas each country has its own tempo, and you cannot expect the Greeks to march like the Germans,” he said in September.

Asian investors have had reason to be less pessimistic about Europe’s financial stability in recent months with the worst-case-scenario of a messy Greek debt default apparently averted – at least for now – and long-term refinancing measures by the European Central Bank boosting liquidity to the region’s banks.